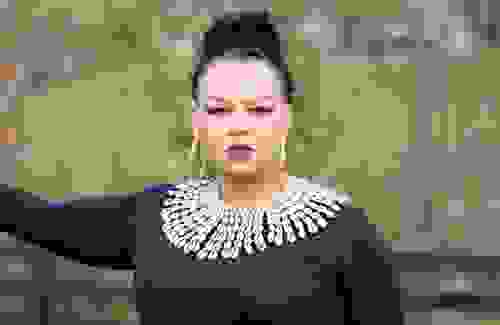 Imagine how hard it must be to save the world from itself- or the villains held within, so difficult that in my book, if you dare to fight you have earned the crown. A hero, super or not, deserves to win, but could you be a winner and still lose? In this case yes… yes you can.

Current events have awakened the desire to grasp for any possibility towards saving us. Should that be someone with a superpower that would end the suffering of people and provide equity to all? That could cure the earth of disease and sickness? Or would that be someone so willing to give to this world and their community they sacrificed so we could survive and be left historical imagery which builds on its foundation for the growth of those to come? Maya Angelou is quoted as saying “I think a hero is any person really intent on making this a better place for all people.” I agree, and recent years has shown me one human to fulfill and fit her description. On screen he played the most iconic African Americans in history, from Jackie Robinson and Thurgood Marshall to James Brown. He captivates as a part of one of the greatest and notable theatrical series to be written with August Wilson’s Ma Rainey’s Black Bottom -reproduced as a motion picture. And though he did not ask, he became a face of blackness, strength, and versatility. The portrayal of each was so remarkable in telling a “black story” to the audience, yet it was the role of black SUPER hero- T’Chella, that propelled any naysayer (should one have existed) into a believer.

“First who are you?” Chadwick stated as a guest on The Shop, “I want to do these types of roles” he continues. Chadwick knew who he was and the importance that carried. This mindset propelled him to scripts that narrated history and at times hardships of the black American. Stories that will live longer than he and provide a level of insight into not only the people portrayed but his own personal character. How remarkable it is to me to be left with the knowledge of influential people of color played by an influential person of color. One who chose the art of acting to contribute a narrative he knew needed to be told and to shine light on what can be described as a dimly lit place in Hollywood for black people. It is not a secret that black men and women on screen have endured particular- often stereotypical castings within films. And many will say look how far we have come, yet it is still evident how far left there is to go. It was noted time and again that Boseman refused to take roles that would embarrass him, or his community and he did not. For Chadwick, getting a foot through the door by those means was not a road meant for travel, and that he would rather wait because of the responsibility and value attributed to characters he would ultimately play. Even as time ticked away that mindset never wavered, not that it needed to. Chadwick was offered and pursued films that told the story he wanted to tell, and he told them very well.

Black Panther. A Hero. A Superhero. Chadwick Boseman. A Hero. A Superhero. One could say the character and the actor to portray them are the same, really, they both have become enough to be a hero AND superhero on their own. What makes this so exquisite is the many layers that unfold within the confines of portraying heroes on screen and becoming that and more in real life. Why? Because being the first black character with the starring lead role in the Marvel Cinematic Universe can be described as a feat within itself, yet what that means for the viewers, the black and brown children and adults around the world who saw in him themselves made it 10X more important. To share not only the art and embody the portrayal but give a performance

that lets the world know black people can be lead actors in one of the most popular comic series to ever exist is remarkable and only the beginning of the real greatness. Tom Hiddleston stated Chadwick was “grace and humility personified” - not Chadwick as a character but him as a human. I would say grace and humility have been utilized as possibly the top traits needed for the hero as a character as well. The ability to possess powers used to help others while living a part of life in secrecy seems to be one of the reoccurring attributes of any superhero viewed, and here on earth we were being offered that in a person.

Four years. That would be the amount of time he fought off camera with stage III and IV colon cancer. Four years, while embodying some of the most grueling roles. Most of the work were action films in which he continued to do stunts, and the world never knew of his battle until he was gone. I sat and watched his performances again more recently in disbelief. How can a person so painfully fight an illness while playing some of the most rigorous characters imaginable? Was that his superpower? Above all he did it with humility, how difficult it must have been only sharing that he was ill but with a few close people. Humility. Secrecy. Grace. Hero. All for the betterment of his community. His work allowed him to leave behind the best examples of a hero. A legacy that told the story of the greats and renders him into a space never to be forgotten. Though I do not think ultimately it was about being remembered, instead he chose his roles because he wanted to record the greatness of those that looked like him, to acknowledge that there was beauty and pride in black people that was unmatched and needed to be shared. In doing so he became undeniably the definition of a hero.

Valerie Clay is a person who enjoys the arts in many forms as well as assisting with the cultivation of student development, it was those two passions that propelled her to graduation from the University of Kentucky with a BA in Interior Design and later a MA in


A Louisville, KY native she has worked at Penn State Schuylkill in student affairs for the last 8 years. Currently as the Associate Director, she is tasked with providing co-curricular opportunities to the campus community in the realm of multicultural and diversity affairs.